Aurélio Valporto, : “Brazil was founded as a colony of exploitation . . . for the benefit of a few... recent scandals involving Batista and Petrobras reflect this”

The downfall of Brazil’s richest man 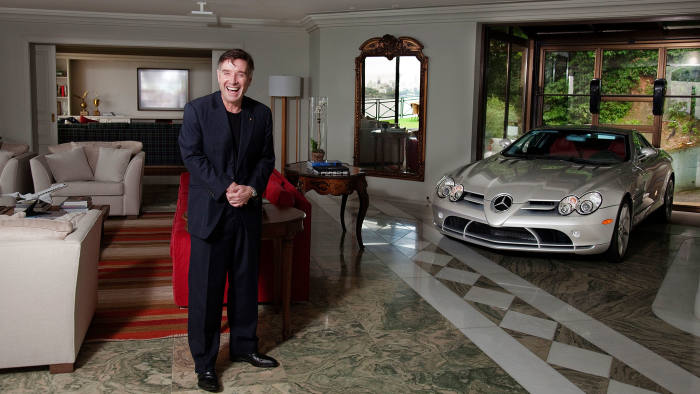 To the untrained eye, it was a Fabergé egg, a pristine example of the multimillion-dollar ornament produced by the favoured jeweller of the Russian imperial family. However, after seizing the object last month from the home of Eike Batista, Brazil’s former richest man who could be facing jail over insider trading allegations, federal police soon discovered it was a fake.

It was yet another bizarre twist in the spectacular fall from grace of Brazil’s most ostentatious billionaire, the shamed poster boy of Brazilian capitalism ranked by Forbes in 2012 as the world’s seventh-wealthiest man.

“What did you expect?! Even his hair isn’t real,” remarked one Brazilian on Twitter in a barrage of comments on social media showing both fascination and disgust with the former oil and mining tycoon. “Where did he hide the real egg?” wrote another in indignation.

The tale of Batista’s downfall not only gives an insight into the lives of Brazil’s super-rich but also highlights their complex role in a country still plagued by extreme poverty and corruption — a country where exhibiting wealth raises not only suspicion but also security and moral dilemmas.

Aside from Batista’s infamous egg, police also confiscated several of his watches, a sculpture, a piano, large sums of cash and a Lamborghini, Porsche and other luxury cars in raids on two of his homes. The federal judge who initially led Batista’s trial, Flávio Roberto de Souza, said he had no choice but to issue the court order to guarantee the payment of fines in the event of a guilty verdict.

“We found sufficient evidence that [Batista] has been getting rid of his assets, making large donations in cash and in real estate and transferring large sums of money abroad,” Souza told Brazil’s TV Globo.

The judge has since been removed from the case after Batista’s lawyers released photographs last month showing the confiscated Porsche exiting Souza’s apartment building. Judge Souza told local media he had been looking after the car because of a lack of parking at police and court facilities.

Since November, Batista has been on trial for two counts of insider trading and one each of market manipulation, criminal conspiracy, misleading investors and false representation following the collapse of his oil and mining empire in 2013.

Public prosecutors allege Batista used Twitter in 2013 to boost the share price of his oil company, OGX, by encouraging his followers to invest in it, just as he was secretly selling his own shares. OGX filed for bankruptcy five months later after it emerged his oil reserves were, like his Fabergé egg, worth next to nothing — a revelation that triggered the largest corporate default in Latin America and wiped more than $30bn off Brazil’s stock market.

If found guilty on all charges, Batista could be jailed for at least six years — the first person to be locked up for such crimes in the country’s history. He has denied any wrongdoing.

An eccentric, self-confessed megalomaniac, Batista has always been a singular character in Brazil’s business world. He holds a world record for powerboat racing in spite of suffering from asthma, he consults spiritualists and had a passing obsession with taking intravenous vitamins. His most recent business ventures involve impotence medication and dog cloning.

Batista, however, is also an exception in Brazil for the way he unashamedly flashed his wealth. He parked his Mercedes in his living room, dined with the likes of Madonna, drank vintage champagne like water and told anybody who would listen that he would soon be the world’s richest man.

While Brazil has its fair share of billionaires, they are largely far more discreet. First, endemic corruption means wealth in Brazil is often suspected to be a product of wrongdoing or, at best, luck, rather than hard work and talent. The allegations against Batista and a bribery and kickback scandal at state oil company Petrobras have only reinforced this view.

“Brazil was founded as a colony of exploitation . . . for the benefit of a few and this practice continues to this day. Very few people get rich because of hard work and the recent scandals involving Batista and Petrobras reflect this,” says Aurélio Valporto from Brazil’s National Association for the Protection of Minority Shareholders who has been summoned as a witness in Batista’s trial.

Stark income inequalities in Brazil, where more than 10m people live in extreme poverty, generate mixed reactions towards ostentatious demonstrations of wealth. Upward social mobility in Brazil means many poor people are fascinated by the lives of the super-rich — who often feature in soap operas, or telenovelas — but they also love to watch their downfall.

Maria Immacolata Lopes, a researcher into telenovelas at São Paulo University, points to last year’s hit soap Amor à Vida and the character of Félix, initially a villain from a rich family who is kicked out of home and forced to sell hot dogs on the street where he learns to become a better person.

Brazil’s wealthy also have practical reasons to remain discreet about their fortunes. Executives in cities such as São Paulo often avoid wearing their Rolex until they get to the office or use rucksacks rather than briefcases for fear of being robbed.

Although murder rates have fallen sharply over the past 15 years in São Paulo, the fear of attack is still widespread. The number of cars being bullet-proofed in Brazil, for example, hit a record high in 2013, up 21 per cent on the previous year.

But many of Brazil’s wealthy opt for a more mundane car to avoid drawing attention to themselves and their families. Following the seizure of his assets, Batista will have no choice but to follow their example.